ATLANTA – Built to provide a lower-cost option for returning products and experiments from space, SpaceWorks® future RED-4U capsules will serve a vital role in the round-trip space transportation network.

In the latest round of testing on October 19th, Atlanta-based SpaceWorks built a prototype of its RED-4U capsule to simulate a portion of the final leg of orbital re-entry, where the capsule fell from near space (20 miles) and landed softly and safely at the test site in Madras, Oregon. The company has been developing its novel line of re-entry devices (RED) for the past four years. This high-altitude drop test was partially funded through NASA’s Flight Opportunities Program and was recently featured on NASA’s website. It is SpaceWorks’ latest step towards fielding a full cargo return capability.

“With the space economy already estimated at 441 billion dollars annually and the recent increase in commercial space platform activity in space, the need for a cost-effective system to return high-value cargo to Earth has never been more important,”

When conducted in space without the confines of gravity, experiments in materials, medicine and pharmaceuticals, fiber optics, computer chips, and other products have shown promise.

What this Means to Operations in Space
As one of the first commercial payload return services to enter the market, SpaceWorks’ RED capsules will offer the ability for space manufacturers and researchers to bring home priority cargo at lower cost, with greater frequency, and increased precision compared to existing down mass options.

How the Capsule Performed
From the ground, the capsule was strapped under a high-altitude balloon and ascended slowly at a rate of 15 miles per hour.  Upon reaching a height of 103,400 feet (20 miles), the capsule floated in near-space for nearly five minutes, was released from the balloon, and then performed a free flight freefall. During freefall, it reached a peak flight speed of 614 miles per hour (faster than commercial jet aircraft) before reaching its low altitude terminal velocity of 190 miles per hour.  Nearing the ground, the capsule’s recovery system deployed and landed it safely and softly close to its intended target. 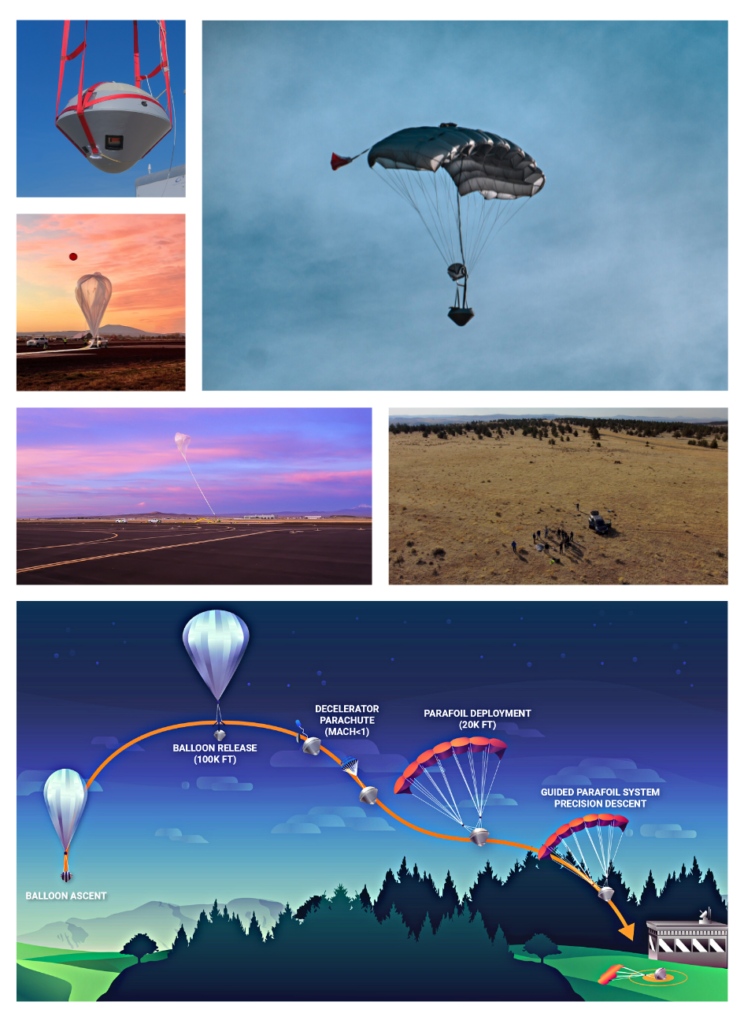 “This was a very exciting day. I am pleased to report that our SpaceWorks flight team successfully achieved all the primary objectives of the capsule test. We are even more encouraged as this test was conducted at the same size, shape, and mass as the company’s future RED-4U operational capsule.”

The recent test proved the capsule’s durability, having endured vibrations and accelerations of up to 8 G’s and thermal differences ranging from -50 degrees F to 50 degrees F. While the test did not reach re-entry speeds and therefore not subjected to extreme heat, the prototype did carry a SpaceWorks proprietary heat shield to test structural endurance at ground impact.

What’s next?
With the maturity of the capsule’s landing system now increased to NASA’s Technology Readiness Level of 6, SpaceWorks plans to move forward toward demonstrating the capsule from Low Earth Orbit.

SpaceWorks Enterprises, Inc. (SEI), based in Atlanta, GA, specializes in advanced concept analysis, systems engineering, product development, and economic consulting for a broad and diverse customer base. SpaceWorks is dedicated to advancing the state-of-the-art in the aerospace industry, from the early design phase to rapid prototyping and flight demonstration. More about this mission at SpaceWorks.aero