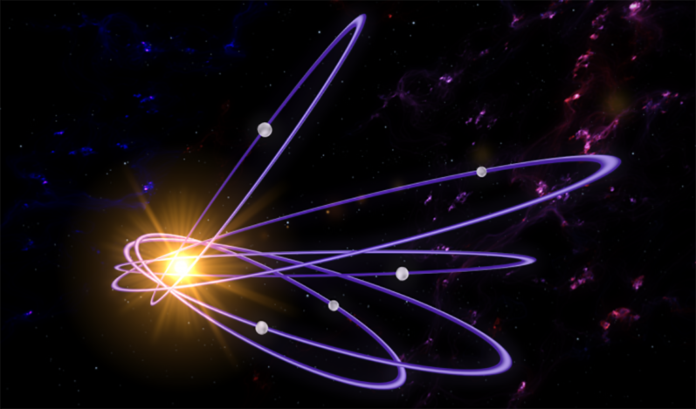 DDA’s annual Dirk Brouwer Career Award (https://dda.aas.org/awards/brouwer) recognizes a major contributor to the field of dynamical astronomy who demonstrates excellence in scientific research, has had a proven impact and influence in the field, demonstrates excellence in the teaching and training of students, and provides outstanding advancement and other support of the field through administration, public service, or engineering achievement. The 2021 award goes to Professor Amina Helmi (Kapteyn Astronomical Institute, University of Groningen) to recognize and celebrate her outstanding contributions to the field of galactic dynamics.

Prof. Helmi (http://www.astro.rug.nl/~ahelmi/dev) is one of the world’s leading researchers in the burgeoning field of galactic archeology. Her work combines theory, computer simulations, and observational campaigns to study how the hierarchical formation history of galaxies leaves traceable imprints in their dynamical-chemical structure. In particular, she has used large datasets from the Gaia space observatory and other survey instruments to reconstruct in detail the past dynamical history of the Milky Way.

Professor Helmi’s work provided direct evidence that a fair fraction of the Milky Way’s globular clusters originated from accreted satellite dwarf galaxies. She also discovered that the inner halo of our galaxy is dominated by debris from a much larger accreted system, which she named Gaia-Enceladus. She demonstrated that its accretion must have led to substantial dynamical heating and was a key contributor to the formation of the so-called thick disk starting about 10 billion years ago. This major event is likely the defining moment in the formation history of the Milky Way and is consistent with our theoretical expectations from cosmological simulations.

In addition to her own research and impressive publication record, Prof. Helmi has also mentored many students and postdoctoral researchers who have moved on to begin outstanding careers of their own.

DDA’s annual Vera Rubin Early Career Prize (https://dda.aas.org/awards/rubin) recognizes an early career dynamicist who demonstrates excellence in scientific research in dynamical astronomy or a closely related field, has had impact and influence on these fields, and shows a promise of continued excellence as demonstrated by past practice in research, teaching, and the advancement and support of the field of dynamical astronomy. The 2021 prize goes to Professor Ann-Marie Madigan (University of Colorado, Boulder) for her work on the dynamics of near-Keplerian systems composed of objects that are individually small but collectively massive.

Prof. Madigan (https://www.colorado.edu/aps/ann-marie-madigan) earned her PhD from Leiden University in 2012 under the direction of Yuri Levin, then held postdoctoral fellowships at the University of California, Berkeley, before her appointment as an assistant professor at CU Boulder in 2016. Her work spans a wide range of astrophysical and planetary sciences, from the dynamics of stars and gas around supermassive black holes to the collective gravity of minor planets in the outer solar system.

Interactions between stars and their remnants with supermassive black holes produce exotic astrophysical events including tidal disruptions of stars, ejections of hypervelocity stars into a galaxy’s halo, and gravitational-wave-driven inspirals of compact objects into the central black hole. Prof. Madigan has advanced our understanding of the statistical properties of the orbits of stars around these supermassive black holes, the interactions of intermediate black holes with supermassive ones, and the stability of stellar disks in active galactic nuclei. She also has probed the formation history of stars near galactic nuclei, the evolution of their orbits, and the mechanism by which they can be disrupted and ultimately captured by the central black hole.

Prof. Madigan has further applied her knowledge of near-Keplerian systems to other scales. For example, she has suggested a possible mechanism by which the observed alignments of the orbits of long-period Kuiper belt objects could arise, and she has proposed that the mutual gravity of comets could cause a periodic influx of comets into the inner solar system.

Prof. Helmi and Prof. Madigan both will be invited to present lectures at the 53rd annual DDA meeting in the spring of 2022.