Goonhilly Earth Station, one of Cornwall’s most iconic locations, will be staging an event this summer to celebrate the 50th anniversary of the Moon landing.

Apollo 50 is a one-off special event on Saturday 20th July that will celebrate this monumental anniversary of history with an educational and entertaining day of music, science, art, and culture.

The Goonhilly satellite communications site based on Cornwall’s Lizard peninsula played a pivotal role in broadcasting the Moon landing in 1969. “Arthur”, once the largest satellite dish in the world and named after King Arthur, signaled the dawn of the space age when it beamed images of the 1969 moon landing to millions of homes around the World.

The first musical acts to be announced to play the event are Art-rock band Public Service Broadcasting who will be bringing their full audio-visual show to the iconic dishes at Goonhilly Earth Station, along with The Radiophonic Workshop, “A Love From Outer Space”, the brainchild of DJ & producers Andrew Weatherall and Sean Johnston and Cornwall’s very own Bowie Lounge.

Following recent sold-out concerts at the Royal Albert Hall and the Natural History Museum, Public Service Broadcasting will perform songs from their 2015 album The Race for Space, a concept album that relives the story of the American and Soviet space race.

Event Director Alec Short said “Goonhilly’ s iconic dishes, the history of the site and its plans for the future makes this such an exciting venue to stage a concert. To have Public Service Broadcasting performing ‘Race for Space’ and The Radiophonic Workshop in the vicinity of the giant dishes will be an almost immersive unforgettable concert experience…”

Radiophonic Workshop, who were the BBC’s sound effects department, have been responsible for creating other-worldly soundtracks to some of BBC television and radio’s most iconic programs like Doctor Who, The Hitchhiker’s Guide to the Galaxy and Horizon. Using early electronics, synthesizers and tape machines, the Workshop’s influence on popular music has been profound and enduring. Goonhilly Earth Station was also mentioned in The Hitchhiker’s Guide to the Galaxy, when its dishes failed to detect the Vogon invasion that ultimately led to the end of the world.

Andrew Weatherall, producer of Primal Scream’s seminal Screamadelica album, and Sean Johnston will also be bringing their experiment in interplanetary audio ‘A Love from Outer Space’ guiding you on a 4-hour trip through the deepest realms of space at the after-show party in The Old Visitor Centre.

A lot more content is due to be released soon including films, guest speakers and art installations, but you can now buy tickets for this strictly limited capacity event from the event’s website apollo50.co.uk. Please note there will be no camping or parking at Goonhilly Earth Station, but the event will have car parks and a basic campsite nearby that will be linked by a Park & Ride service. 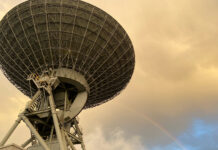 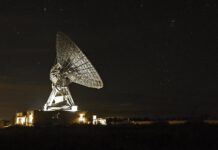 Goonhilly to Support Intuitive Machines’ Missions to the Moon