The Instituto de la Ingeniería de España (IEE) hosted the 4th Space Engineering Congress (CIE) and the Interdisciplinary Space Week (SIE) during the week of June 20-24, 2022. In this edition, the focus was not only on purely engineering topics, but also on other aspects of great relevance for the space sector. 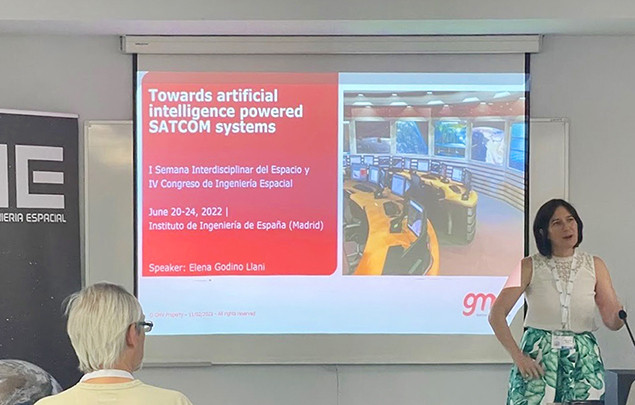 One of the key objectives of the CIE and SIE has been to connect all the participants of the space economy: industry, institutions, laboratories, universities to promote and contribute to the progress of space engineering and to increase social interest.

During the course of the event, different sessions, roundtables and presentations have been organized on various topics such as space science and exploration, as well as the technological challenges we face today; space applications and the status of the Galileo program; training and dissemination of STEM activities or the search for funding for the development of new products and the opening of new markets.

GMV, a platinum sponsor of the event, was represented in the various roundtables and presentations by 14 professionals.

In the block on science and exploration, Jorge Potti, GMV’s general manager of Space, took part in the roundtable on “Trends and ambitions in the main sector”. For her part, Mariella Graziano, GMV’s executive director of strategy and business development for Space Flight Systems and Robotics, presented “GMV’s vision and role in space exploration” and “Autonomous decision making: a key to complete and efficient space exploration”.

The block on applications and operations drew the largest number of company participants. GMV showcased its capabilities in this area through presentations on the Spanish Space Surveillance and Tracking Center (S3TOC), SBAS systems, AI-based satellite communication systems, blockchain technology in the space sector, the satellite ground segment, and the company’s work on the second generation of the Galileo system (G2G) and for Galileo’s public regulated service (PRS).

GMV also featured in the technology block as a success story in the area of European space surveillance from Spain, with talks on the Copernicus Precise Orbit Determination (CPOD) Service, which has been developed and operated by GMV since 2014 for the European Space Agency, and on the application of satellite navigation technologies to self-driving cars.