Space Perspective Opens the Space Tourism to the Cryptocurrency

Space Perspective, the Earth’s leading luxury spaceflight experience company, today began accepting cryptocurrencies – including Bitcoin, Ethereum and many others – as payment to reserve a flight on Spaceship Neptune.

During the booking process on www.spaceperspective.com/bookyourspaceflight, customers can now select crypto as a payment option and will be directed to Coinbase.com to safely and securely complete their transaction – a first in the commercial space flight industry. 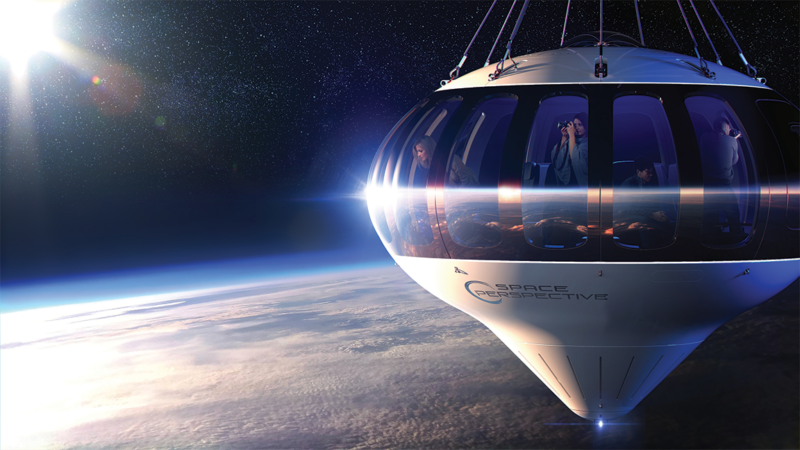 “Space Perspective is revolutionizing space tourism, and that includes offering our customers the ability to reserve their once-in-a-lifetime journeys to space via crypto,”

“The flexibility to pay with crypto is another opportunity for us to differentiate the Space Perspective experience, and we are proud to lead the industry by accepting Coinbase.”

Space Perspective is also partnering with Cool Effect to offset the carbon footprint of its logistics operations including Spaceship Neptune flights. The company will be contracting with a third party to calculate the offset each year.

“Every aspect of a Space Perspective flight is radically gentle, and that includes our impact on the environment. Spaceship Neptune is the only carbon neutral, zero-emission way to space, and our partnership with Cool Effect will allow us to offset the operations of our carbon footprint each year while contributing to a cleaner planet tomorrow,”

In Q4 2021, Space Perspective announced a historic $40 million Series A financing round, the largest for a human SpaceBalloonTM company to date, bringing the total amount raised to $48 million. Space Perspective also announced Florida’s Space Coast Spaceport in Titusville as the location for the company’s worldwide campus and manufacturing complex along with plans to hire approximately 240 full-time permanent jobs by the end of 2026. The company has already expanded its headcount by more than 50 percent over the past year and has filled key leadership positions in recent months.

Space Perspective, founded in 2019, was created to provide a transformative opportunity to view planet Earth from space. The company’s Spaceship Neptune will fly eight passengers and a pilot to the edge of space and back in a climate-controlled, pressurized capsule propelled by a high-performance 300-foot diameter SpaceBalloon. The six-hour flight offers views of the curvature of the Earth against the blackness of space from an altitude of over 100,000 feet (20 miles/30 kilometers). Space Perspective’s Spaceship Neptune’s flight path includes a gradual and gentle two-hour ascent at 12 MPH, rising to 100,000 feet (a suborbital climb, topping out above 99% of the Earth’s atmosphere). Gliding at apogee for up to two hours, the spaceship then makes a similarly gradual, two-hour descent to Earth before gently splashing down in the ocean, where a ship retrieves the passengers, the capsule, and the SpaceBalloon.

Commercial flights are targeted to begin in late 2024, with more than 500 tickets sold to date. With the first year of seats completely reserved, Space Perspective is currently taking reservations for 2025 and beyond. Tickets are priced at a market-beating $125,000 per person, and bookings are made with a fully refundable deposit beginning at $1,000. Entire capsules are also available for reservations (up to eight guests and a pilot). Space Perspective’s human spaceflight launches are regulated by the FAA Office of Commercial Spaceflight.

Space Perspective is the world’s first luxury spaceflight experience company. It invites more people than has historically been possible to experience a thrillingly new and visceral perspective that expands the human consciousness – the incredibly exhilarating panoramas and scale of Earth in space. The Observer cited Space Perspective as “the best suborbital space tourism offering in the world.”

Space Perspective is led by industry luminaries Jane Poynter and Taber MacCallum and their unique-in-the-world expert crew who have been integral to all human SpaceBalloon flights in the last 50 years. Building on that experience, the Space Perspective crew has innovated and patented the safest SpaceBalloon technology in the world. With the only technology enabling routine accessible flights to the edge of space, Poynter and MacCallum have been dubbed ‘Masters of the stratosphere’ by Bloomberg Businessweek. MacCallum also served as Chairman of the Commercial Spaceflight Federation.

The focus on taking care of the world we live in is nothing new to Poynter: over the years, she has led ground-breaking environmental projects for the United Nations and the International Space Station, including the development of the first carbon sequestration model of a mangrove forest that could be used to calculate carbon credits to provide additional income to the community.