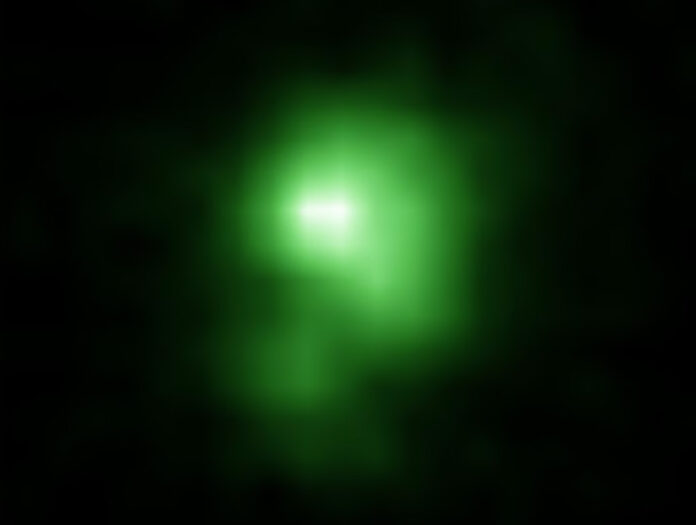 Looking up at the night’s sky, twinkling with celestial objects, do you ever dream of discovering something new? How about something that sheds light on the early days of the Universe? A decade ago, citizen scientists, in the Galaxy Zoo project, helped astronomers discover a new and important class of galaxies, the Green Peas.

Green Pea galaxies are small, relatively nearby galaxies that are forming stars ferociously, with an intensity rare in today’s universe. In many ways, they resemble the galaxies that were common thirteen billion years ago, when the universe was much younger. Like the Green Peas, these early galaxies gave out prodigious amounts of ultraviolet light, causing the ionization of almost all the hydrogen lying between galaxies in the universe. This resulted in a dramatic change in conditions in the universe, and is hence one of the most interesting research topics for astronomers today. Unfortunately, the huge distances of the early galaxies from us makes them very faint and difficult to observe directly to understand how they ionized the universe.

Sangeeta Malhotra, of NASA’s Goddard Space Flight Center, explains, “The importance of the Green Peas is because they offer the exciting possibility of understanding the earliest galaxies by studies of nearby objects! But, although we have studied Green Peas for a decade, we didn’t even know how the Green Peas fuel their intense star formation and how long this star-formation activity lasts.”

Malhotra is part of a team of astronomers from the United States and India who tried to address these questions by using the Arecibo Telescope and the Green Bank Telescope (GBT) in 2019, to carry out the first large-scale search for atomic hydrogen, the primary fuel for star-formation, in Green Pea galaxies. Co-author Tapasi Ghosh of the Green Bank Observatory, who worked at the Arecibo Observatory for many years, said, “We detected hydrogen in about half our Green Peas, with the large hydrogen content in many Green Peas suggesting that the starburst activity may be fueled by the mergers of galaxies. But, some Green Peas have very little remaining hydrogen; for these, it looks as though the fuel reservoir was almost entirely consumed in the starburst.

There is still much more to learn about these enigmatic objects, especially how the ionizing radiation escapes Green Peas despite the presence of so much hydrogen (which is expected to block such radiation). Malhotra mentioned that the team is now carrying out observations of the hydrogen-rich Green Peas with radio interferometers, the Very Large Array in New Mexico and the Giant Metrewave Radio Telescope in India, which should allow them to cast light on this and other issues.

These findings, which have been published in the Astrophysical Journal Letters, used the Arecibo Telescope in Puerto Rico and the GBT in West Virginia, both National Science Foundation facilities. As co-author Nissim Kanekar of the National Centre for Radio Astrophysics of India explained, “For many decades, the GBT and the Arecibo Telescope have been the outstanding single-dish telescopes for such studies, due to both their outstanding sensitivity and the superb efforts of the scientists at Arecibo and Green Bank to preserve the radio frequency environment and limit the effects of human-made radio signals. Sadly, the Arecibo Telescope is no more today, although efforts are being made to bring it back to life.”

The other co-authors of the work are Santosh Harish of the Arizona State University, Jayaram Chengalur of the National Centre for Radio Astrophysics, India, and Kristen Jones of the University of Kansas.

To learn more about Green Bank Observatory science and to see research opportunities visit our website.